We’re currently having a stretch of beautiful weather (we’re also having a drought, but that’s a story for another day). So last weekend, the lovely missus and I decided to take a short drive out into the country. The goal: Sarrant, the closest of the Plus Beaux Villages de France to Chez Newman.

There are around 150 such designated villages in FR. We’ve probably visited a dozen of them.

Sarrant’s claim to ‘plus beau’ fame is its circular bastide, or innermost part of town. You enter through a wooden gate, complete with spikes, just as though you were entering a medieval castle.

Prepare to go back in time.

To complete the image, the center of town is dominated by a pretty cathedral (it looks like the stained glass windows would be pretty, but the church was closed when we were there) and it’s surrounded by half-timbered houses. 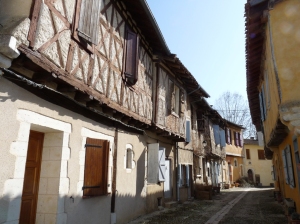 Since the drive was so short – only 35 minutes or so – we decided to check out a couple of other nearby places as well: The Moulin de Brignemont, an 18th C mill, and Chateau Lareole, a pretty 16th C chateau. Alas, the mill is closed until June and the chateau doesn’t open till May. Sigh. At least we have a reason to go back for another pretty Sunday drive in the country.

To see more pix of Sarrant, click here. The town’s website also has some pretty shots, including some old photos and some aerial views.

The stories of a 'never out of the country until we moved to France' American.
View all posts by skinsphins →
This entry was posted in Entertainment, News and politics, Travel and tagged bastide, Brignemont, Chateau Lareole, Plus Beaux Villages de France, Sarrant. Bookmark the permalink.

1 Response to Sarrant: Another Plus Beau Village de France